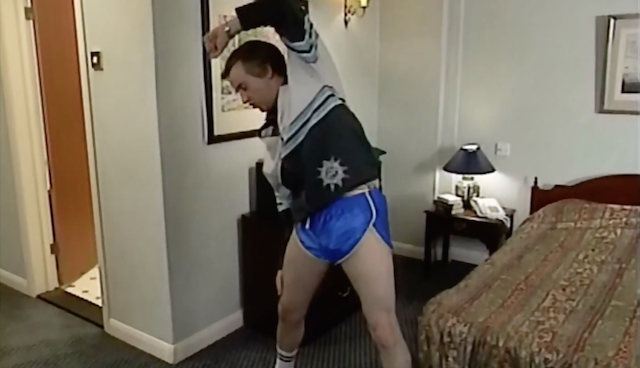 So, a mere 10 months after I completed my first ever Freeletics workout, I finally finished my 15 weeks. Ha! Take THAT, useless flabby body. Except, er… Hello, useless flabby body. Shouldn’t you be somewhere else? Look, I’ll just come out and say it. If I was hoping to achieve a complete change in physique over 15 weeks a la Levent(15 weeks that has been dragged out over 10 MONTHS), then I was an idiot. Well, I am an idiot. But let’s not focus on the negatives. I am a stronger, fitter idiot. True, I still have a long way to go. And yes, I do sometimes feel like I’d like to meet the person that invented the burpee, encase them in concrete and drop them into the ocean. I can’t deny that. But if, like me, you’re facing the reality of this thing being even harder than you thought it would be, just think about where you were when you started. And if you’ve only just started, HAHAHAHAHAHA! What are you, an idiot?

After having hell week kick me in the balls for seven days straight, it was ‘nice’ to get back to something like a normal schedule. ‘Nice’ as opposed to just nice, because Freeletics isn’t nice. It’s all relative. Here’s my week 16 schedule.

So… Not too bad. Eh? What do you think? Looks doable? After hell week, I figured it would be pretty straightforward. But bloody hell, Hades gets me every time. EVERY TIME. As I write this, I’m about to go and do it again as my first workout for week 17. And I was just thinking ‘start of nice and steady, pace yourself, you’re going to cruise through it’. Which is EXACTLY what I thought last week AND IT DIDN’T BLOODY WORK. I ‘cruised through it’ in the same way that a 19-stone bank manager cruises through the London Marathon. Always the same. First 25 burpees, no problem. Pull ups, can’t star them all but hey. Push ups, no problem. Another 25 burpees, getting tougher but no major difficulties yet. But what’s this? A couple of 40m sprints? 40m? That’s not very far, is it?

And as my old mate* Chas Hodges would say, ‘wallop’. Because there’s no rest, it’s straight back into the burpees. Everything starts to get a bit harder, but if you’re anything like me, you won’t want to slow down. And so it goes. Anyway, I was pleased to get a PB of 24.10, no star because, well, you know…

Next up, Dione. I sound like a stuck record, but I am increasingly narked by the fact that I’m unable to star myself on this. So I figured I’d go al out for a decent time, and was well pleased with 34.10, which was almost four minutes better than my previous time. It’s all down the burpees. I’m basically at (or getting closer to) a point where I’m not having to stop during reps. That’s not to say that I’m breezing through them with no problem, I’m just a little bit more committed to pushing myself.

Ah, Venus. Now here is a workout you can get your teeth into. It’s one of those ones that you know is going to hurt, but I infinitely prefer muscle fatigue over aerobic fatigue. I went for it, and despite the fact I felt I was really tailing off, managed to get a PB of 22.43*. My ‘plan’ was to try and stick as closely as possible to 5 minute splits for each round – definitely possible on the first two, but by round 3 my arms were screaming. Still, a decent achievement. If I do say so myself AND I DO.

Later that day I had to do 100 burpee squat jumps. My comment on the app was, I believe, ‘what sick bastard thought this up?’. CHRIST. Given that I’d hope to do 100 burpees inside 10 minutes, my target was to get inside 15. HAHAHAHAHAHAHAAHAAAHAHAAA. HA.

After about 12 of these twats, I was having to stop and get my breath. Managed to get to 20 before stopping again. I then settled into what I am going to laughably refer to as a ‘rhythm’, whereby I did 10 reps before resting. I ended up on 19.03* and came into the kitchen spluttering like a man who had just been shipwrecked and washed onto shore. (EXACTLY like that: I was wearing a lifejacket.) Not for the first time, I found that I actually got better as the workout went on. The reason for that is that at around the halfway mark I thought ‘I’m not going to get through this unless I start concentrating’. So I really did – every burpee and, more importantly, every subsequent high jump done with thought given to the movement all the way through.

I’ve spoken before about my tendency to let my mind wander while I’m working out. It usually has two effects: firstly, I lose count of where I am. And because I daren’t risk doing fewer reps than specified, I inevitably end up doing more. Secondly, my form is all the place at times. But so what? Well, I find that really concentrating on every rep somehow makes the workout… Not easier exactly but more manageable. They definitely don’t seem to last as long.

So look, this is the closest you’re going to get to gleaning some actual useful information from this blog. If you can, try to work on every rep. Think about the movement and be aware of your body position at all times. Not only are you going to get a more effective workout, by focusing on individual reps, you make the whole thing a lot less daunting. Well, it works for me. Maybe it will work for you. Maybe it won’t. I couldn’t really give a shit. Only kidding! You’re the best thing that’s ever happened to me PLEASE DON’T LEAVE.

Since I started writing this post, something interesting has happened. During Hades. I will save it for next week’s blog, but essentially I have answered the question, “can I fall vertically from a height of approximately 2m and land on my back like Jackie Chan without crippling myself?”. The answer, if you’re interested is, “yes, but with a few caveats”. It has been mooted that I maybe visit something called a ‘hospital’, but in true knob head style, I have elected to scoff a couple of Ibuprofen and hope that it gets better. Hopefully I will be okay in a couple of days. I’d really hate to miss Kentauros. Really.